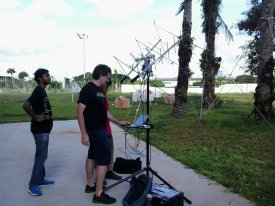 I therefore decided to build a tracker that would automate the pointing and following work.

The resulting system came together just in time for Maker Faire, so I conducted its first tests on site. It worked first time! (It did, however, fail the second time...)

Although there are all sorts of interesting things to pursue now that I have an amateur license again, I am particularly interested in space communications because of the awe-inspiring possibility that I can, directly and as an individual, interact with things in deep space. A more detailed post on my interest, reasoning, and priorities may appear at some future time, however another important detail is that I'm indulging a childhood love of electronics; a little more tinkering than is strictly necessary to achieve the communication objective is very clearly in evidence.

After deciding that I wanted to build a tracker, I did a little looking around and discovered that AMSAT-NA offers several items designed by Mark Spencer WA8SME who does various things within ARRL to improve classroom access to space communications. In particular, AMSAT-NA offers a circuit board and programmed microcontroller for Mark's WRAPS (Wobbler RadFxSat Antenna Pointing System) and a ready-made pre-amp designed specifically to improve amateur satellite operation. This seemed like a sufficient recommendation for pursuing this approach. It's worth noting that a far less time-consuming approach would have been to purchase second-hand satellite-TV gear via eBay, however this would involve rather less tinkering!

I didn't keep accurate time records, but I'd estimate 40-60 hours of hands-on building - most of it in too much fiddling with metalwork - and another ~20 hours of related activity. By far the most difficult part for me was fabricating the aluminium components to support the two motors, one for compass direction rotation ("azimuth"), the other for vertical adjustment ("elevation"). It appears that I've forgotten most of what I learned about metalworking in high school. 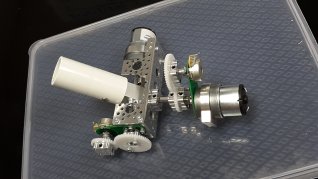 The motor assembly: azimuth motor and position sensor to the right, elevation motor towards to top, elevation position sensor towards the bottom. An interesting element of the design of WRAPS is that it doesn't use stepper motors, instead it uses DC motors with reduction gears to 0.5RPM plus potentiometers (variable resistors) as position sensors, which is what the plastic gears are about; they're not load-bearing. The PVC pipe to the left is what the antenna array will be attached to. The aluminium channel will be mounted on a ball bearing turntable, itself on top of a metal box that the azimuth motor will also be bolted to. 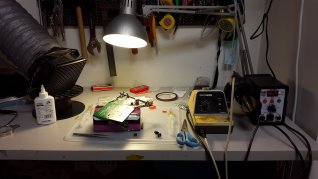 The controller board uses a mixture of through-hole and surface-mount devices. Although I learned to solder when I was 7 years old, this was my first ever experience with soldering surface-mount devices. A huge thanks to Adnan for lending me his heat gun (the tool to the right, sleeping ("SLP") at the time of the photo) for this purpose. Other notable items in the photo include:

(Apologies to non-technical readers for the following technobabble.) 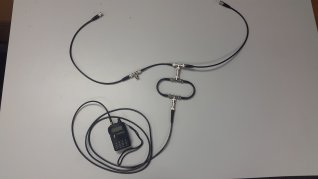 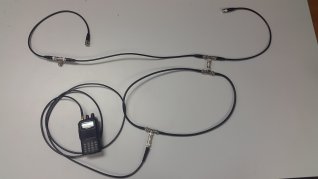 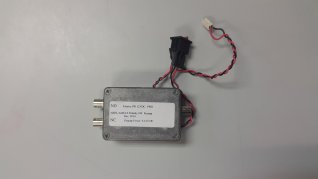 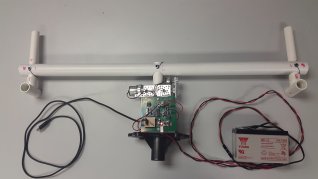 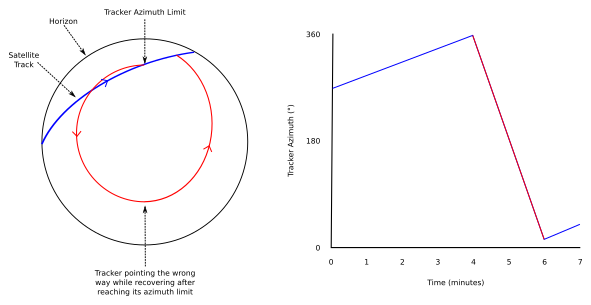 Getting my head around rotator geometry and turn points took considerably longer than installing SatPC32. The rotator has only 360° of azimuth freedom. This is fine if you just want to be able to point in a selected direction and don't mind waiting a minute or two to get there, but a problem if you want to smoothly follow a satellite across the sky and the satellite's track happens to cross the tracker's azimuth limit, as the tracker then has to then stop tracking, turn almost 360° in the other direction, and then resume tracking, losing communication for a minute or two. There are 450° and 540° trackers available specifically to address this problem, but WRAPS is intended to be a little simpler so - like many simpler trackers - the idea is decide per-pass whether 0° is north or south, pick up and turn the whole system around to match the decision, tell the microcontroller (there's a switch on the board), and tell SatPC32. An hour of fiddling at HackerspaceSG got this straight in my head.

Most of Saturday was tied up with setting up the HF station in the field to the right (out of frame in the picture at the top), so the satellite test was a little rushed. I:

Sure enough, as the satellite cleared the horizon, the antenna array began following it and we could clearly hear the beeps and warbling of a digital mode for as much of the pass as our position would allow the system to follow (there was a building behind me in the picture at the top, so we couldn't follow it all the way). I was both thrilled and suspicious that a system this complex worked on its first test, nothing with this many separate parts ever works first time...

I went through pretty much the same process on Sunday afternoon, except that I also connected and tuned a second radio for uplink. Unfortunately the result was rather different; the system somehow swapped horizon and zenith (directly overhead), so it pointed the antennas up as the satellite cleared the horizon and gently lowered them towards the horizon over several minutes as the satellite climbed. There was a little over a minute at ~45° elevation where we could hear a conversation in progress, however I couldn't hear my own calls (part of the benefit of the dual-band operation used by most amateur satellites is that it's possible to hear your own calls as you make them, which also allows you to determine that everything is working, or not as in this case).

This creates one of those unfortunate situations where it's not at all clear what went wrong, and worse, where it's also not clear why the system ever worked. Hopefully there's just a SatPC32 configuration setting that got itself flipped at some point. I assume that it's capable of dealing with trackers that treat 0° as the horizon as well as those that treat 0° as directly overhead, meaning that there will be a configuration setting to indicate this. I'm certain that I would have noticed that the antennas had been pointing in the wrong direction during the first test!